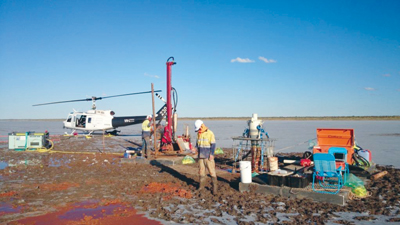 RUM Jungle Resources has announced a maiden JORC-compliant brine potash resource of 13 million tonnes at its Lake Mackay South Potash Project in Western Australia. The resource highlights the growing potential of Rum Jungle’s portfolio of sulphate of potash projects across Central Australia, incorporating the Karinga Lakes and Lake Hopkins projects and the yet to be granted tenements associated with Lake Amadeus and Lake MacDonald.

The resource is based on the drilling of 22 shallow vibracore drill holes in 2011 and 11 air core drill holes in 2014. In order to enable deeper assessment of the brine resources, drilling was carried out by a specially modified air core rig with standard 75mm air core rods. The drill rig, air compressor, support pontoon, heli-cage and crew were moved around the lake with a Huey helicopter.
The deepest hole was drilled to 27 metres. Siltstone basement rocks were intersected at 24 metres and 18 metres in two different holes. The basement rocks contained a brackish aquifer, beneath the lake brine aquifer which defines the lower boundary of the brine resource.

This deeper aquifer could provide an ideal source of processing water. This is a big bonus given the location of Lake Mackay in the Great Sandy Desert.

The higher potassium concentrations and lower SWL in 2011 is explained by drier conditions. In early 2014, prior to the air core drilling campaign, more than 400mm of rain fell in the Lake Mackay region, which diluted brine concentration and resulted in a rise in SWL. Parts of the lake were still water-covered during drilling operations.

Rum Jungle Resources has earned 51% of potash rights in four exploration licences owned by Nova Energy, a subsidiary of Toro Energy, which total around 440sqkm of lake surface on southern Lake Mackay. A minimum amount of $250,000 was spent to earn the 51%. Rum Jungle can spend a further $750,000 within two years to earn 80% of the potash rights over the four tenements from Toro.