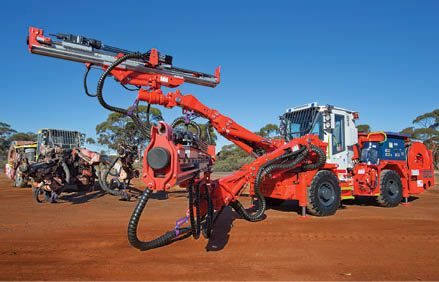 WITH the mining industry looking to reduce costs across the board, while still maintaining productivity with equipment that remains reliable and continues to perform as required, rebuilding older machines to as-new condition is becoming an increasingly attractive option. But it requires equipment suppliers with the facilities, skills and factory backing to be able to rebuild equipment to as-new, OEM-compliant standards.

This process must be based around mining equipment with the right pedigree of inbuilt durability and product quality to have the potential for a second life.

An example of this is a seven-year-old Sandvik DD420 development drill which recently underwent a major overhaul at Sandvik's Kalgoorlie Customer Service Centre (CSC) in Western Australia that brought it back to as-new condition, including upgrades to latest-technology components.

Sandvik Mining's Kalgoorlie CSC workshop supervisor Nathan Bradshaw says the 11-week rebuild process resulted in a machine that can be expected to work productively for a further seven years if it is operated and maintained in line with Sandvik's recommended maintenance procedures.

In addition, the rig, which had been operated in a Western Australian nickel mine for the past seven years, had to be re-specced to meet the quite different standards of the Queensland silver mine for which it was being rebuilt.

"The two mine sites had widely varying compliance requirements – both are very rigorous, but both are very different," says Nathan Bradshaw.

As a result of the rebuild, the machine is in as-new condition and is covered by a Sandvik Australia 12-month/1500-hour warranty. And the silver mine that it was rebuilt for is getting an updated, as-new development drill for around 70% of the cost of a new machine.

The scope of works for the DD420 rebuild involved stripping the rig right down to its base chassis and components, replacing specified items, and repairing or replacing other parts and components as necessary to ensure everything was back to OEM-compliant condition.

"Following the rebuild, all service, parts and safety bulletins, as well as machine upgrades, will have been completed, so the finished product is as up-to-date as any machine can be – given it is a seven-year-old carrier and drill rig," says Nathan Bradshaw.

"Throughout the process we liaised closely with the customer and the response back from them is that they are delighted with the quality of the rebuild, and the performance and productivity of the rig.

"An important element of the success of a project like this is that the durability and quality is built into these Sandvik underground rigs from the beginning, so that we have solid, strong carrier and drilling module to work with, and which have the strength to continue reliably performing for a further seven years," he says.

Sandvik Mining's Region Australia vice president Jim Tolley says this DD420 rebuild – and others of a similar scope being carried out at Sandvik service centres around Australia – are a prime example of how the mining industry is driving more value from suppliers and equipment.

"Just a few years ago, a drill rig of this age would probably have been retired and replaced with a new one," he says. "Now, with miners looking to better 'sweat their assets' and get more out of them as part of an industry-wide drive to reduce costs, options such as rebuilding older machines to as-new OEM-spec condition are becoming increasingly popular.

"But to do this, they require the combination of product durability, design and reliability to justify the rebuild investment, and the ability of a supplier to bring equipment back up to as-new condition.

"At Sandvik Mining, we are investing heavily in our ability to provide these high levels of machine refurbishment and rebuilding, through our Australia-wide network of Customer Service Centres, and our new-concept Productivity Centres.

"Projects such as this one at our Kalgoorlie CSC are examples of how we can work with our mining customers to reduce their capital equipment costs, while maintaining or improving their required levels of productivity," Jim Tolley says.