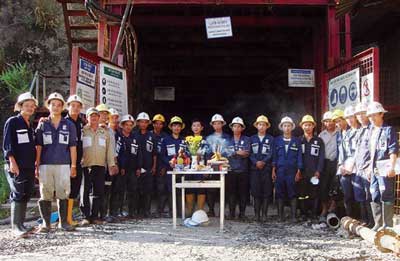 BESRA has celebrated the re-opening of its Bong Mieu gold mine in Central Vietnam with a ceremonial underground blast. The event, attended by company representatives and local officials, marks the return to operations by the property after it was shut down in November last year following a series of severe weather events.

Besra CEO John Seton said, “We are very pleased to announce that Bong Mieu will now recommence operations after what has been a particularly difficult period in our company’s history. Late last year we were hit with not one, but two typhoons, quickly followed by a severe tropical rain storm, which destroyed the access road to our site at no less than five locations, as well as causing significant damage on site.

“After more than six months of hard work by our staff and contractors, we will recommence mining operations shortly, with the plant and production ramping up to normal levels in the following months.”

As at June 9 dewatering of the underground mine was at 95%. As at that date the company said there were 45 employees working on site with up to 300 to be called back to duty by the end of June. Equipment that had been temporarily transferred to Besra’s other Vietnam property at Phuoc Son, had been transported back to Bong Mieu for the return to operations.

Besra says it is continuing to pursue its property loss and business interruption insurance claim resulting from the typhoon damage.

During the March quarter there were 3943 ounces of gold produced from Phuoc Son with a cash cost per ounce of US$1452 and all-in sustaining costs of US$2085 per ounce. Costs were higher than budget and production was significantly below budget. As a result the company has revised its production guidance for the 2014 financial year to 31,000-34,000 ounces.

Besra has received notice of the repeal of a $12 million export tax assessment, which had been a root cause of much of the hardship of the last 12 months. Recovery from the ramifications of the assessment will take months.