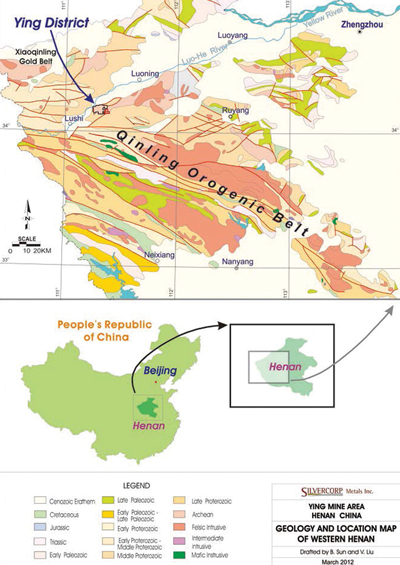 THERE has been a significant gain in measured and indicated mineral resources at Silvercorp Metals’ Ying silver-lead-zinc mining district in Henan Province. An updated NI 43-101 Technical Report reveals a 52% increase in tonnage and 12% and 8% increases respectively in contained silver and lead resources when compared to the 2012 Technical Report.

The update was prepared by AMC Mining Consultants (Canada) and covers the SGX/HZG, HPG and TLP/LM underground mines on the Ying property. AMC examined all aspects of the project, including drill core, exploration sites, underground workings, processing plant and surface infrastructure.

Based on proven and probable reserves only, the Ying mine complex is a viable operation with a projected life of mine (LOM) through to 2030, assuming annual average production of about 6 million ounces of silver from 2014 to 2025, about 3 million ounces from 2026 to 2028 and about 1 million ounces from 2029 to 2030. It also has the potential to extend the LOM beyond 2030, via further exploration and development, particularly in areas of inferred resources.

The results of the 2012-2013 underground drilling program on the Ying property show that most of the major mineralized vein structures are still open at depth and laterally.