Strong ties between DRC and China


DEMOCRATIC Republic of Congo (DRC) President Joseph Kabila recently visited China to review the status of Sino-Congolese projects and discuss ways to strengthen and enhance relations between the two. The DRC has benefited greatly in the past 25 years from Chinese investment in infrastructure and mining. 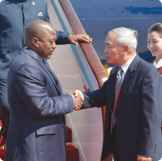 In recent years Chinese investment in the DRC as well as Congolese exports to China have grown rapidly. A recent RAND Corporation report concluded that bilateral trade between the DRC and China accounts for approximately 2% of total Sino-African trade.

In 2008, the Chinese government entered into a contract with the DRC government for US$6 billion worth of infrastructure projects - from roads and railways to the construction of hospitals, health centres and universities in exchange for China’s participation in DRC’s mining investments.

In addition to contributing to the DRC’s infrastructure capabilities, which in turn provide new opportunities to other foreign partners, the Sino-Congolese ventures have created thousands of jobs for the Congolese people, generated tax revenues for the DRC and provided a critical knowledge transfer between the two countries.

Mining has played an important role in the DRC’s development and China has contributed greatly. At the end of 2014 there were 14 joint Sino-Congolese mining projects under way, primarily in copper but also other minerals.

These projects employ thousands of Congolese, source local and regional equipment, develop miles of new roads and promote further development throughout the country. The total initial pledge towards these projects has been US$3.72 billion, including $320 million for a hydro-electric power plant. The total spent in this field in 2014 alone was US$1.037 billion.

A major joint venture operator in mining is Sicomines Corporation which at the end of 2014 had spent US$1.5 billion since its inception. Total Chinese labour employed is 1479 and total Congolese labour is 11,057.

Between 2008 and 2014 China invested in 10 infrastructure projects in the DRC, including roads, railways and health facilities. In 2015 estimated Chinese expenditure on public arenas, roads, solar projects and other infrastructure is US$250 million.