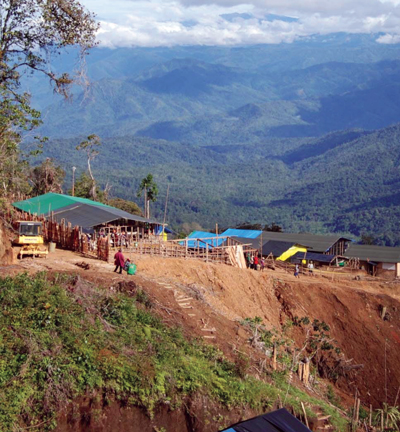 Crater Gold Mining has commenced gold mining at its High Grade Zone (HGZ) project at Crater Mountain in Papua New Guinea’s Eastern Highlands Province. The HGZ mine becomes the first new gold mine in PNG for eight years. Following the signing of the Mining Lease by the Minister for Mines Byron Chan on November 5, 2014 the company has successfully concluded a compensation agreement with the landowners and formally registered it with the Mineral Resources Authority of PNG.

Crater Mountain is 50km southwest of Goroka. Formerly a tier-1 BHP asset, there has been in excess of 14,500 metres of diamond drilling to date, the majority focused on the Nevera prospect, which hosts the HGZ mine.

Crater Gold’s CEO Greg Starr says, “This is an exciting milestone for the company as we have successfully transitioned from explorer to now become PNG’s newest gold producer.

“We anticipate producing some 10,000 ounces of gold in the year ahead at an all-in cash cost of below $400 per ounce average over the Mining Lease term, positioning the mine within the lowest quartile in terms of operating costs. Our Mining Lease enables us to continue mining for the next five years with the right to extend the Mining Lease.

“As a high margin operation, the HGZ project will generate strong cash flows, which will fund further development at the HGZ mine and exploration activities at the company’s other assets.

“On behalf of the Board I thank all those who have assisted us in bringing HGZ into production, particularly our management team and dedicated local staff.”

* The January/February edition of The ASIA Miner will include a feature article on Crater Gold and its work in PNG.