Eighty years have passed since Charles Warman created the Warman Pump in Kalgoorlie, Western Australia – a pump that revolutionised the mining industry, and one which continues to push the boundaries of pump performance to this day. 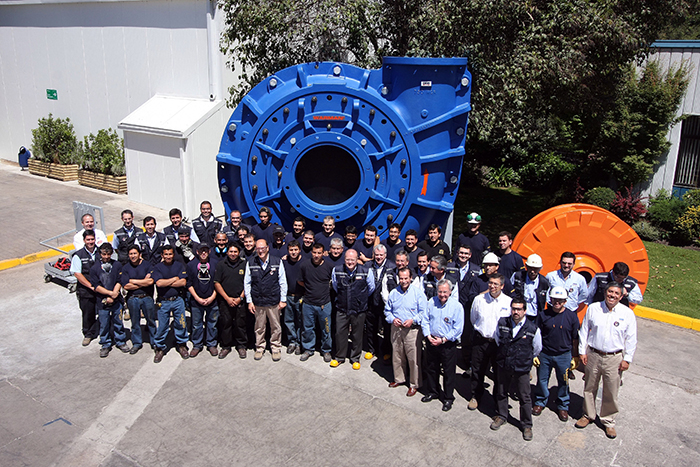 Charles Warman’s original design a hard-wearing slurry pump that used replaceable liners and a replaceable impeller, something that had never been done before.

Today, this iconic slurry pump is designed and manufactured by Weir Minerals, a global provider of engineering technology and services to the mining industry, who acquired the Warman® pump in 1999.

“Charles Warman was a visionary and an innovator. The use of rubber lining in the pump was ground breaking as it reduced total ownership costs, was safer to handle and offered extended wear life in many abrasive slurry applications. It is a great example of solving customer problems with material science, and is still taught in Universities today,” commented Marcus Lane, Global Product Manager for centrifugal pumps at Weir Minerals.

In honour of this legendary brand, Weir Minerals hosted the 80th Anniversary event at the end of May in Kalgoorlie. Attended by a variety of guests, including customers, members of the Western Australian School of Mines (WASM), design houses, as well as current and past employees.

Throughout the evening, attendees relived Warman pumps’ history and gained an insight into some of the future innovations planned.

“It was a privilege to share this special night with some of our key customers, past and present employees, and members of the Western Australian School of Mines,” stated Ricardo Garib, Divisional President of Weir Minerals. “Warman is one of our leading brands. It has truly shaped the Mining industry over the past 80 years and is a product we are all very proud of. The Warman pump, invented to solve high wear issues in slurry pumping, created a thriving industrial business that is now the cornerstone of Weir Minerals with over 8,000 people, and over 150 manufacturing and service centres across the globe.”

Warman pump through the decades
After its initial manufacture, the pump was quickly adopted throughout the goldfields in Western Australia and by the 1950s, as customer demand rose, Charles Warman expanded his business by opening offices in Sydney and Perth.

During the 1960s the rapid growth of the business continued with manufacturing and sales outlets established around the world. The Warman® Series ‘A’ pump was accepted and became world leader in its field. Further work on the Warman AH® pump resulted in the development of interchangeable metal and rubber wearing components.

The Warman® AH pump range was extended with the addition of the AHP high-pressure pump in 1974. At the time, this was the largest rubber-lined high-pressure slurry pump in the world and is still in service today in many tailings pipelines across the globe.

Innovations continued throughout the decades, with pumps designed for a number of tough applications including Flue Gas Desulphurisation.

In 1994, the Warman® GSL pump was developed to handle high flows and corrosive slurry. It took the market by storm due to its superior performance and long life and became the global standard.

“I think one of the key reasons for the growth of the Warman pump was that it was reliable, people came to trust it because it had been around for so long. It was this trust that enabled them to focus on other things in the plant and not have to worry about the pump stopping their business,” said Mr Lane.

After its acquisition by Weir Minerals in 1999, a number of technological advancements were achieved for the Warman® pump range.

In 2002, a revolutionary new impeller and inlet design for pumping mineral froths and high-density viscous slurries was developed, and in 2009, Weir Minerals created the Warman® WBH pump with axial and rotationally adjustable throatbush to even out wear. Due to its innovative design, this pump soon became the new slurry pump standard.

“Here at Weir Minerals we are always thinking of new ways to improve the Warman pump for our customers. Research and development has underpinned all of the product development that we’ve completed and is absolutely crucial to the business,” Mr Lane said. “We have a fantastic understanding of the many environments in which our pumps operate and the mechanisms of wear. This has enabled us to tailor geometrics and materials to suit specific applications and gives us a competitive edge in the marketplace.”

Today the Warman® pump has an unparalleled world-wide reputation in slurry pumping, commanding a leading share of the global mining market. There are few mining sites in the world where Warman® slurry pumps cannot be found.

As technology progresses and society demands new materials, the Warman® pump is primed and ready to provide them. Weir Minerals has developed its own IoT platform Synertrex™, which can be fitted to a Warman® pump to monitor its performance.

“The last eighty years of the Warman pump has given us a wealth of knowledge in how to operate a pump and efficiently transport slurry. Synertrex is going to be able to capture that wealth of knowledge and improve the product,” states Michael Hambe, Data Scientist for Weir Minerals. “The Synertrex platform allows us to collect and analyse data to predict the pump’s performance and determine how efficiently it's operating. This empowers our customers to run their pump at the optimal threshold of performance.”

“In terms of Australian mining exports, the Warman pump is probably one of the greatest success stories. We will continue to innovate and make the Warman® pump even bigger and better,” Ricardo Garib concludes.

Following the anniversary event in Kalgoorlie, Weir Minerals has embarked on a six-month celebration, sharing the history of Warman®, commemorating the generation of experts behind the brand, revealing key innovations behind the pump and telling the stories of the long-standing pumps on sites around the world.