AUSTRADE trade commissioner, New Delhi, Tom Calder was present at the IMME 2014 international mining exhibition organized by CII at Kolkata, India, and spoke to The ASIA Miner on the sidelines of the show on December 3, 2014. 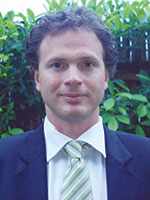 The ASIA Miner: What was the extent of Australian participation at the IMME 2014 exhibition and at the Australian events around it?

Tom Calder: The 2014 edition of IMME saw the highest ever level of Australian participation, with 24 Australian organizations represented in 14 booths. This is a reflection of the strong commitment of Australian industry to the Indian mining sector.

The ASIA Miner: What were the Australian events and activities organised by Austrade coinciding with IMME 2014?

Tom Calder: The main activity was the Australian Mining Seminar and Function held in Kolkata on the eve of IMME where Australian mining equipment, technology and service (METS) capabilities were profiled through a presentation in front of more than 100 senior Indian mining contacts.

There were presentations from Rio Tinto, IRL/Brierty and from the state governments of Queensland and Western Australia followed by networking cocktails and dinner. The Australian participants were provided with a business matching template to select their networking priorities with the Indian mining contacts present.

A press conference was also held on the same day to raise the profile of Australian METS and I can say that the coverage in the Indian media was well above expectation.

All other activities were at the IMME exhibition, where Austrade provided a business lounge, refreshments and business matching services through five Austrade staff present at the show.

The ASIA Miner: Could you tell us about the presence and interest levels of Australian METS companies in India?

Tom Calder: Austrade works with around 40 METS companies who have a presence or active interest in India, the majority being SMEs. More than half these have their Indian presence headquartered in Kolkata, which is a natural selection, being the major metro city best placed to service the major mining areas, and headquarters to the likes of Coal India, Hindustan Copper, SAIL RMD, Geological Survey of India, and close to the headquarters of Tata Steel, Uranium Corporation, NALCO and others. Each year, we see around three new entrants, and a few more companies who survey the market.

Another trend is for one or two Australian METS companies to set up partial manufacturing/development facilities in India each year, to achieve significant cost savings to help penetrate the Indian market, as well as to utilize this low cost facility for global markets. Key components and technology continue to come from Australia.

The ASIA Miner: There has been a period of very slow growth in Indian mining, but recent optimism following the new government assuming charge. Your insights?

Tom Calder: There was a period from mid-2010 until earlier in 2014 when bureaucratic delays, particularly in environment and forest clearances; judicial mandates, significantly those affecting iron ore mining; and a general recessionary trend made it a difficult period for Indian mining. With the change of federal government in mid-2014, a number of reforms in mining and power have been announced.

To start with, there was a welcome merger of some ministries such as Coal and Power, also Steel and Mining, which is expected to remove a lot of inter-ministerial procedures and delays. There has also been some simplification in the approvals process for equipment being used in underground mining.

Pursuant to the Indian Supreme Court judgement on coal block allocation, the new government has decided to start anew and re-auction many of the cancelled blocks before March 2015. The auction of these coal blocks opens up opportunities for Australian contract miners and METS companies, the former to bid directly or in JV, and the latter to initially be involved in the geo-mining consultancy requirements of the many bidders, and later to provide technologies for detailed planning and mining requirements post allotment.

Indian industry expects further stage wise reforms in mining, mining laws and procedures, with these likely to be implemented through 2015.

The ASIA Miner: How does this fit in with the Australia-India bilateral relationship enhancement with the new government?

Tom Calder: Going back to 2008, the Australia-India Joint Working Group on Energy and Minerals was set up and this engagement has generated new ideas for bilateral cooperation and has also brought together stakeholders from both countries.

Under the present Indian government we have seen an upsurge in Australia-India bilateral engagement, with reciprocal visits by both Prime Minister Abbot and Prime Minister Modi in a short period of time. The visits have been very successful, and have generated considerable interest in the international media and business communities of both countries.

It is significant to note that the subject of resources was very high on the agenda during both visits, endorsing the view that Australian natural resources and METS are as important for India’s mineral needs and mines as is Indian investment for the resources sector in Australia.

As a follow up to these two visits, Minister Robb will lead a high level Australian business delegation to India in the period from January 12-16, 2015, to participate in business events during the ‘Australian Business Week in India’. Needless to say METS and resources investment will be important elements of the programs for the mega event with nearly 400 delegates.