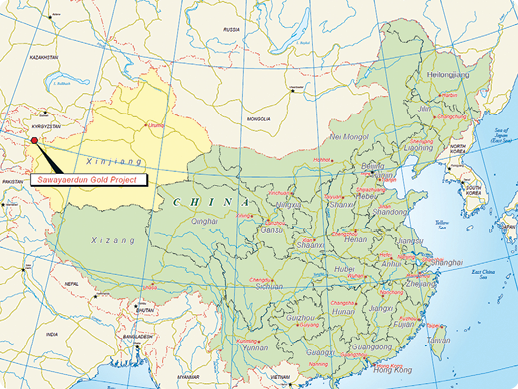 GobiMin’s Sawayaerdun Gold Project is in the far west of China, near the border with the Kyrgyz Republic.

The mineral resources contained within the project have been independently estimated by Mining One and are based on data collected by GobiMin as at October 13, 2014. The 2014 resources have been estimated using results from 313 surface diamond drill holes for a total of 97,204 metres plus adits and trenches.

The resource 2014 infill drilling results have further increased the confidence and understanding of the mineralization particularly within the measured and indicated areas of the resources and thus provide more reliable data for the mining plan.

The Sawayaerdun gold deposit is within a mining licence that is surrounded by an exploration licence. The licences are held by Xinjiang Tonyuan Minerals Ltd which is 70% owned indirectly by GobiMin.

Exploration activities have been carried out in the area since 1952. Stream sediment sampling in the 1980s led to discovery of the deposit in 1985. The deposit has been subject to multiple phases of exploration including surface mapping, diamond drilling, trenching and underground development via adits, cross cuts and strike drives. During 2014, a further 41 diamond holes were drilled primarily into zone IV to further define the continuity of mineralization and to upgrade inferred material.

GobiMin holds an equity interest of 70% in Xinjiang Tongyuan to explore, develop and operate the Sawayaerdun project. In addition, it owns 40% equity interests each in three companies incorporated in China to engage in base metals and precious metal exploration, including nickel, copper and gold, in Xinjiang, and a 3.5% equity interest in the Yanxi Copper Property.