CRATER Gold Mining has made its first sale of gold produced from the High Grade Zone (HGZ) mine at the Crater Mountain project. In early May the company sold 17.4 ounces from the processing of ore through the bulk sampling gravity separation plant during the implementation stage of mining. 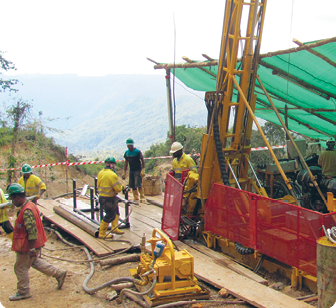 Drilling at the Crater Mountain Gold Project which is not far from the town of Goroka.

The average recovered grade was 6.0 grams/tonne gold with the precious metal recovered from a combination of mostly low and some high grade development drives.

At the time Crater Gold said mining of targeted high grade intersections of gold bearing vein sets was due to commence soon. The immediate priority was the intersection of two north-south trending structures, NV1 and NV2, with the east-west trending structure EV2. This was the site of bonanza grade channel samples up to 847 grams/tonne.

Mining capacity is at the implementation stage, with full capacity anticipated in during the third quarter as the mining plant upgrade is completed.

Crater Gold’s managing director Russ Parker says, “This is a major milestone for the company. We have now sold our first gold in the history of the company. I’m looking forward to ongoing cash flow as our objective is to establish the company as a profitable producer.

“When we reach plant capacity, we anticipate producing 10,000 ounces of gold in the first full year of production, at an all-in cash cost of below $400 per ounce average over the mining lease term.

“The HGZ project is a high margin operation. The mine will generate strong cash flows which will fund further expansion at the HGZ mine and enable further exploration activities at the company’s other assets.”

The producing veins have been delineated from mapping of underground development and subsequent diamond drilling in 2014.