HAVILAH Resources has discovered new copper mineralization at its Croziers Dam prospect and Olympic Dam style iron ore-copper-gold (IOCG) alteration signatures at other locations within its extensive package in northeast South Australia. The project is a joint venture with MMG Exploration, a subsidiary of MMG Ltd, one of the world’s largest producers of zinc as well as a substantial producer of copper, lead, gold and silver. 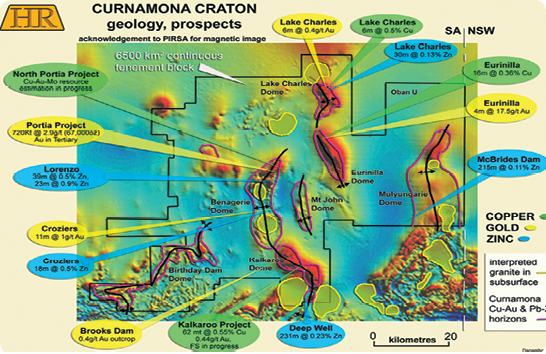 Geology and prospects within the Curnamona Craton in South Australia, adjacent to the border with New South Wales.

A best intersection of 12.5 metres from 213.5 metres @ 0.46% copper was returned from depth at the Croziers Dam prospect.

Havilah’s managing director Chris Giles says that the discovery of copper-bearing skarn on Havilah’s tenements is an exciting new development. “Apart from the untested potential at Croziers Dam, there are extensive areas of granite contact on Havilah’s exploration licences that could potentially spawn similar mineralization.

“The indications of IOCG-style alteration are also significant because they are evidence that such mineralized systems are possibly active on the Benagerie Ridge, warranting further drilling of likely targets.”

This drill hole was designed to follow-up copper indications in earlier shallow aircore drilling and showed copper anomalism for almost its entire length.

Croziers Dam is roughly half way between Havilah’s Portia and Kalkaroo deposits. The observed abundance of magnetite and green calc-silicate minerals in association with chalcopyrite in core is indicative of skarn-style mineralization. Skarns host some of the world’s largest and richest copper deposits.

Under the JV agreement, MMG may secure a 60% participating interest in any potential development projects it identifies within Havilah’s exploration licences, provided it has spent $12 million within a five year period.

The discovery of copper mineralization and IOCG-style alteration signatures at Croziers Dam is a positive for Havilah given that the exploration risk is carried by MMG. In addition, Havilah will retain meaningful exposure to any upside if MMG chooses to secure a 60% participating interest in any potential development projects it identifies.

MMG is an international upstream base metals company which owns and operates the Lane Xang Minerals Ltd Sepon mine in Laos, Kinsevere mine in the Democratic Republic of the Congo and the Century, Golden Grove and Rosebery mines in Australia. It also has development projects including Dugald River, a high-grade zinc-lead-silver deposit in northwest Queensland, and the Izok Corridor base metals project in northwest Canada.