Unique Geometrica dome does the job 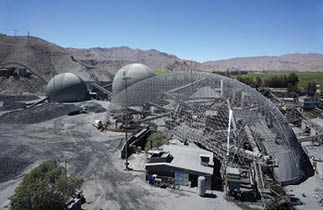 Geometrica designed a unique heart-shaped dome for the crushing facilities at the Coemin facility in northern Chile.

CHILE is known worldwide for its wine production and its copper mining, and in several places in the country, these two activities coexist. At the entrance to Cerrillos Canyon in Chile lies the Coemin facility, a plant that processes raw copper ore from Carola mine. Just 30km southeast of Copiapó city, this area also hosts grape plantations and is home to families who work in the mine and vineyards.

Dust from ore handling and crushing is obviously not desirable for the vineyards, so the plant had long used preventive measures such as foam sprays and fabric barriers to control emissions. As the plant grew, they decided to completely enclose their crushing operations. The task was a challenge, as the equipment and conveyors were not laid out with an enclosure in mind. The main area encompassed more than 5000 square metres in a shape that was whimsically irregular after several expansions.

The initial concept consisted of two smaller domes and a huge arched vault for the facility’s largest area. Local suppliers were consulted but the spans for the big area were simply too large and complex. As a result, project architect Percy Diaz contacted Geometrica for a proposal. The Geometrica team travelled to the site and met with the plant operators.

The large arched vault had its drawbacks: bending stresses were very large; it would have required increased truss depth and structural members that would have been too heavy; clearances for access and interior space would be compromised. This vaulted shape meant some of the existing equipment would have to be modified or have to remain uncovered. Equipment modifications were undesirable as they would require plant downtime.

Geometrica proposed a bold and very different solution - a Freedome, Geometrica’s trade name for a free-style dome. The concept inspired Percy Diaz to sketch a free-form plan. Geometrica considered the scope and scale of the new vision and confirmed that the Freedome could be built without increasing the budget.

Geometrica was tasked to design a dome that would spring from this very irregular plan. Existing equipment and buildings forced the shape: crushers and sifter equipment had to be enclosed, while a hopper had to remain outside. The supporting structure had to bridge existing buildings. Percy Diaz’s plan was a bit like a heart – roughly three sided with rounded corners and a dimple in one of the sides. Spans were 90 metres in the principal directions.

When the dome was approved for construction, all elements varied, meaning this project was truly a custom architectural achievement. Thanks to precision pre-fabrication, it was installed by local labour who had no problems following the simple procedures required to build it.

Construction of the dome started on the foundation and progressed toward the apex. No scaffolding or operating downtime was required, as the partially-built dome supported its own weight plus that of the construction crews through the whole process. Cladding consisted of rectangular corrugated metal sheets with a polyester finish.