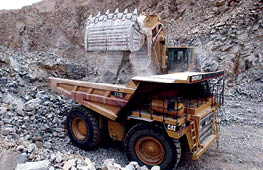 Mining operations at one of Kazakhmys projects in Kazakhstan.KAZAKHMYS has completed the acquisition of Koksay Copper Project in southeast Kazakhstan The project is at scoping stage and has a resource of about 3.4 million tonnes of copper with an average grade of 0.48% and with by-products of gold, silver and molybdenum.

Koksay will be Kazakhmys’ third major growth project and the purchase price is US$260 million in cash of which $65 million has been deferred. Of the deferred amount, $30 million is payable on January 1, 2015 and $35 million on July 31, 2015. The second instalment is subject to confirmation of reserves.

Koksay is around 234km from Almaty and is well located for existing infrastructure. The project has an estimated mine life of more than 20 years with average annual production of around 80,000 tonnes of copper cathode equivalent, 60,000 ounces of gold, 400,000 ounces of silver and 1000 tonnes of molybdenum in concentrate.

Kazakhmys recently announced that the Government of Kazakhstan had agreed to reduce mineral extraction tax rates at some of the group’s mature assets. Lower tax rates have been applied to the deposits in the Zhezkazgan region, excluding the Zhomart mine, and at Konryat mine in the Central region.

The assets benefiting from the lower rates are all within the two regions which have been identified for potential disposal as part of Kazakhmys’ proposed restructuring which was announced on February 27, 2014, and followed a review of assets during 2013. These assets have been particularly affected by declining grade and low profitability.

The new tax rates are effective retrospectively from January 1, 2014, and are applicable for one year after which a further application can be made. The value of the reduction for a 12-month period, at current metals prices, is about $40 million.

In line with the restructuring, the company recently announced that it has entered into a definitive agreement to transfer certain of its mature assets in the Zhezkazgan and Central regions to Cuprum Holding, a company owned by Vladimir Kim and Eduard Ogay. The parties have also entered into two framework services agreements enabling the continuing group and Cuprum Holding to provide each other with transitional and longer-term services following completion of the definitive agreement.

After completion the continuing group will continue to own the mining and producing assets in the East region and Bozymchak mine in Kyrgyz Republic as well as the three major growth projects, and it is proposed that the company be renamed KAZ Minerals.

Kazakhmys chief executive Oleg Novachuk says, “This transaction provides a sustainable future for a set of relatively mature assets which, although of limited economic value to the group, remain important within their local communities, where they are major employers. The transaction will strengthen the financial position and move the company towards its strategic goal of production dominated by large-scale, low-cost, open pit mines.