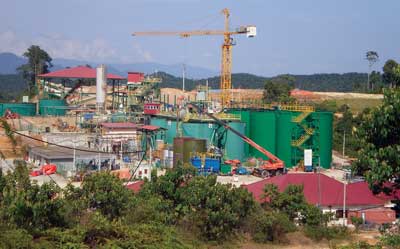 IN line with Monument Mining’s Oxide Magnetite Development Plan at the Mengapur Polymetallic Project, further exploration and development activities are continuing. The exploration program is focusing on identification of oxide magnetite material and during the March quarter this included 821 metres of drilling in 14 drill holes.

Under phase 1 of the development plan, Monument is also undertaking metallurgical test work to design and ultimately commission a magnetite concentration processing plant with daily capacity of 7000 tonnes. Research and development continues on the magnetic separation process. This process progressed strongly during the March quarter, as the company advances towards development of a marketable magnetite product.

The lower production coincided with the mill being fed with low grade oxide and leachable sulphide materials, according to the 2014 mine plan, which also resulted in lower gold recovery. This was partially offset by higher mill throughput.

Monument says its mill processing team has identified operating and process improvements that will lead to increased overall gold recovery rate. The company will mine and process the higher grade sulphide materials thereafter once the phase IV processing facility is in place.

The mining operation for the quarter and the nine months resulted in lower ore extraction and higher strip ratio due to a push back of the west high wall at the Selinsing open pit in order to access an additional oxide ore body. Ore mined for the quarter was 101,955 tonnes, a 64% decrease compared to the same period of 2013. For the nine months ended March 31, the total was 405,347 tonnes, a 29% decrease from the corresponding period.