GLOBAL mining deals picked up in 2014 and the trend is likely to continue this year amid ongoing commodity price plunges and a capital shortage that has forced miners to slash spending and cut costs. Base metals and gold assets were best performing sectors while activity was quiet in other mining sectors, according to figures from SNL Metals & Mining.

In its report ‘Base Metals and Gold Acquisitions Activity, 2005-14’ SNL calculated that there was an improvement in mining asset transactions in 2014 with 73 acquisitions individually valued at more than US$10 million. It stated that the deals totalled US$21.56 billion compared with US$11.88 billion in 2013. 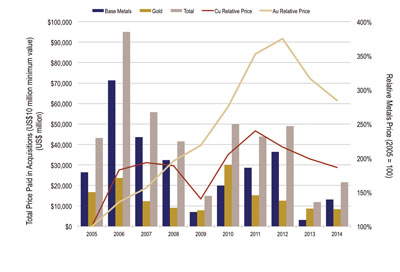 M&A activity in the base metals and gold sectors since 2005.

In recent years, mining companies have been cautious with regard to acquisitions, and since 2012 have bought fewer assets requiring large capital investment. Instead, most have opted to maximize the value of assets they own, and to enter joint ventures that reduce costs while maintaining production.

Spending on base metals acquisitions was more than three times that of 2013. The average cost of these in 2014 was US$451 million, compared with US$210 million in 2013 and US$1.17 billion in 2012. The increase was almost entirely due to copper, with nickel spending increasing 4% and zinc falling 73%.

Of the combined base metals and gold acquisitions, SNL says more than 33% were by Canada-based companies, valued at more than US$9.02 billion. Another 13 deals, totalling US$7.52 billion, were by Australian companies, and seven deals worth US$1.32 billion by Chinese companies.