THE low costs and high grades of the Didipio Gold Project in Luzon have contributed greatly to OceanaGold’s record revenue and net profit in 2014. Managing director and CEO Mick Wilkes says the project has been a huge success for the company and continues to perform very well. 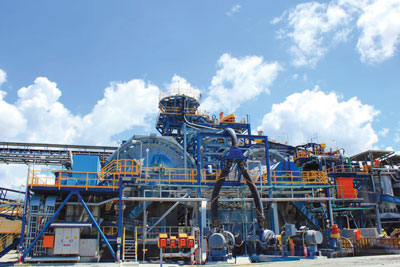 Processing facilities at OceanaGold’s Didipio Gold Project in the north of the Philippines.

Another reason, according to Mick Wilkes, “is that all the people who work for OceanaGold are extremely dedicated to the goals of the company, one of which is to run our operations as efficiently as possible. This has flowed through to all operations including Didipio and will continue.”

The company reported EBITDA of US$239.8 million for the year ended December 31, 2014, and also managed to reduce its total debt by US$150 million. “We’re one of the few companies – not only in the gold sector, but the mining sector generally – who has been able to pay down significant debt from operating cash flow. It’s a big change from around three years ago when we had about US$270 million of debt,” he says.

Of Didipio Mick Wilkes said: “It is high grade and has low operating costs because of the low strip ratio and significant copper by-product credits. It’s also a large ore body with dimensions of 150 metres by 100 metres and lends itself to low cost mining.

“The underground has always been part of our mining plans. Last year we ran geotechnical and resource drilling and engineering studies to get a better understanding of the nature of the ore body and developed an optimal mine plan. Now we understand the ore body much better, we know the new plan will add considerable value.

“We’ve reduced the size of the open pit by 67 million tonnes which means there are around US$215 million in mining costs we now don’t have to spend between 2018 and 2020. We will access the high grade core of the ore body by bringing in the underground earlier in late 2017. The underground will have two domains to enable us to access the high grade core.”