Australian engineer Austin Engineering has signed a new five-year contract deal with miner Rio Tinto for products and services at the operator’s mines. 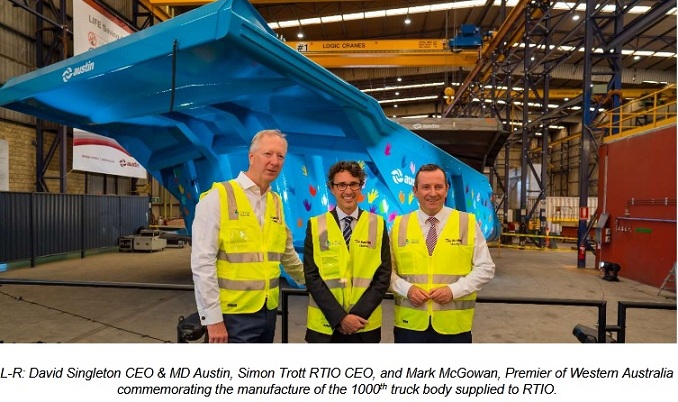 The deal, which Austin officials estimate to be worth about A$300 million, includes the supply of dump bodies, lightweight trays for ore trucks, heavy machinery buckets, water bodies and other fabricated products.

The contract covers off-site repairs and other associated services for both Austin-supplied equipment and for the machinery of other OEMs.

In addition to Australia, the new call-off/umbrella agreement also will cover supplies from its facilities in North and South America as well as Indonesia. It is effective 16 December.

Austin said some pre-agreed pricing for buckets and haul truck trays for Rio’s fleet were outlined in the new deal.

“Austin will utilise its recently established ‘Innovation and Technology Hub’ to continue to develop…products to help meet Rio Tinto’s objectives to optimise the safety, lifecycle and productivity of its global heavy machinery fleet,” the firm said.

Austin has been working with Rio Tinto Iron Ore (RTIO) for consumable equipment, off-site repairs and other equipment for 33 years. Last week, the pair held a ceremony in Perth to mark the manufacture of Austin’s 1,000th truck body for RTIO.

Austin CEO and Managing Director David Singleton said: “As a result of this commitment by Rio Tinto we have the confidence to invest in developing our Austin 2.0, strategy. As part of this, we recently announced a $6.5m investment in advanced manufacturing at our facilities initially in Western Australia and Indonesia that will bring new levels of quality, production capacity and flexibility.

“In addition, our Innovation and Technology Hub in Western Australia is focused on meeting the safety, mine site efficiency and decarbonisation goals of Rio Tinto and other customers in Australia and around the world,” he added.