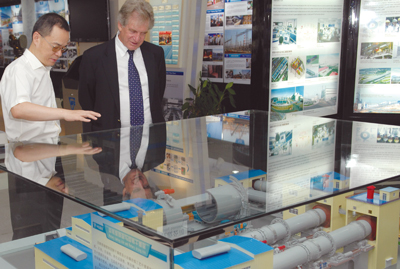 Holdings has signed an agreement with China Nonferrous Metal Industry’s Foreign Engineering and Construction Co Ltd (NFC) to complete the definitive feasibility study (DFS) for the Chaarat Gold Project in the Kyrgyz Republic. The work will be carried out by NFC’s affiliated design institute China Nerin Engineering Co Ltd (NERIN) and is expected to be concluded during the first half of 2015.

Chaarat Gold says both companies bring unrivalled relevant credentials to the project. NERIN designed the Zijinshan gold/copper mine, a large heap leach operation in Inner Mongolia, as well as the Jinfeng gold mine in China. Jinfeng has many similarities to the Chaarat project both in ore composition and mining conditions while Zijinshan mine was developed in stages comparable with the development plan for Chaarat.

NFC has developed and invested in about 90 mines around the world and has recently completed construction of Bozymchak copper gold mine in the Kyrgyz Republic for Kazakhmys. It is re ideally placed to understand the particular conditions of the Chaarat project both in country and regionally.

The project manager nominated for the preparation of the DFS was a member of the project management teams for Jinfeng and Bozymchak. The other team members will also be experienced in the development of gold mines.

Chaarat’s CEO Dekel Golan says, “We are excited about this milestone. It is my belief that this agreement is a first step towards a broader cooperation between our companies. In my meetings with president Wang and vice president Qin it has been made very clear to me that NFC is interested in more than just the preparation of the feasibility study, and the management of both our companies have agreed to discuss further cooperation. NFC is affiliated with our large Chinese shareholder (China Nonferrous Int’l Mining Co Ltd) which owns about 9%. We view the strengthening of our relationship as a positive.

“More generally, we are seeing a renewed and strong interest in gold projects in the Kyrgyz Republic from mainly Asian-based companies including those from China, Japan, Korea and Indonesia.”

In March 2014 Chaarat announced the appointment of contractors to complete the DFS. In June it announced that it was undertaking additional drilling to support the assessment of an enlarged heap leach opportunity. This is complete and results are being evaluated. It has also completed the data collection work from the revised location of the production facility in the adjacent valley to the deposit.

While drilling and data collection were under way, further work on the DFS was put on hold until results could be evaluated. During this period, representatives of NFC and NERIN approached Chaarat’s team in Bishkek. Following a strategic assessment of the development and financing options available to Chaarat, the Board was convinced that working with a reputable Chinese group would ensure a more comprehensive review of available development options for the project as well as retaining the costs of the DFS within the existing budget.

As a result, after considerable negotiation and a process of careful review, the Board decided that the best option to complete the DFS was to sign an agreement with NFC/NERIN and discontinue the contracts with the previous DFS contractors.