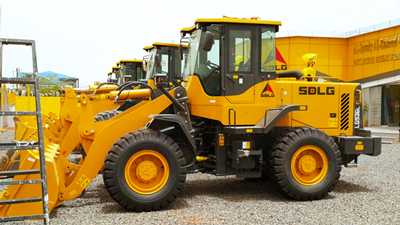 The inaugural event in SDLG’s Top Driver Thailand program has taken place in Suphanbrui with 60 participants. The program is aimed at enhancing machine operators’ skills and improving safe practice on site.

In partnership with its national distributor Italthai Industrial (ITI), it was SDLG's first Top Driver event outside of China. The four-day program kicked off with a series of lectures and training courses from SDLG and ITI staff.

The classes covered topics such as good operating practice, parts and service, and safe operation protocol. This was followed by a series of practical demonstrations with both live machinery and a simulator.

SDLG’s Top Driver Thailand is open to anyone interested in operating equipment, whether they currently work in the industry or not. It is being run in association with the Thai government’s Ministry of Manpower and a number of officials from the department attended the first event.

Following the educational program that kicked off the event, participants then sat a theory test before moving on to several operational challenges on a wheel loader simulator. Those with the best combined performances after the written and practical tests were advanced to a final round where they were tested on an actual SDLG wheel loader, undertaking a number of operating challenges.

At the end all 60 participants received government-endorsed certificates and awards and the top 10 operators also advanced to the final of the program, which will take place in mid-August.

In addition to running the Top Driver program the four-day event also hosted a small exhibition highlighting the full range of equipment available from SDLG and the many applications it is suited to. One of the most popular applications for SDLG wheel loaders is for material handling in the rice industry.

Shandong Lingong Construction Machinery Co Ltd, known as Lingong, is one of China’s leading manufacturers of construction equipment, which it produces under the SDLG brand. It is one of the world’s leading suppliers (by volume) of wheel loaders. The company’s headquarters are in Linyi, China and it has an additional manufacturing facility in Pederneiras, Brazil.