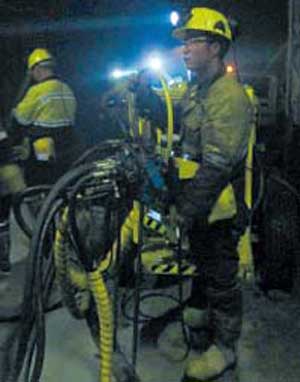 The annual awards are organised by AustCham Shanghai and sponsored by Westpac. This year there is a record 110 nominations in eight categories.

Ausino provides diamond core drilling services to the mining industry. It offers diamond core sizes at diameters ranging from 30mm to 96mm. Core hole depths, ranging in angle from vertical to horizontal, are provided from a few metres to many metres with the deepest completed to date being over 700 metres.

Ausino chairman Malcolm Powell says the company was established in Perth, Western Australia, in June 2005 with the intention of registering a Chinese company to operate in the People’s Republic of China. Following registration of a Wholly Owned Foreign Enterprise (WOFE) in Beijing, Ausino signed its first underground drilling services contract in March 2006.

“Ausino’s Operations Centre and base is in Zhangjiakou, which is in Hebei Province, about a 3-hour drive northwest of Beijing. This centre includes administration, maintenance and manufacturing workshops, and storage warehousing. In addition Ausino has an administration office on each site that a drilling contract is being undertaken. Ausino has contracts at underground mines in Caijiaying, Hebei Province; Baishan, Jilin Province; and Jinfeng, Guizhou Province. The company has also completed contracts in Shaanxi, Hebei, Guangdong, Gansu, Qinghai and Hunan provinces as well as Inner Mongolia,” he says.

Despite the mining downturn, Ausino has increased employee numbers to 160 and expanded its internal manufacturing and maintenance facilities enabling it to recondition and modify its fleet of drill rigs and auxiliary equipment. In late 2014, Ausino decided to enter the surface drilling service industry, an environment quite different from its traditional underground domain. Two new surface multi-purpose deep-hole exploration drill rigs were purchased from Multi-Power at a cost of approximately RMB 2 million.

One of these was a drill rig on tracks and the other a man-portable allowing for ease of portability in restrictive terrain. During manufacture of the latter Ausino requested design modifications which enabled it to gain two different types of rig for the price of one. This was a proto type called the Discovery HD, which is now offered by Multi-Power as a new rig. In 2015, with the new rig on order, Ausino gained a major surface exploration drilling contract with Chinalco Rio Tinto Exploration Company.

Ausino’s 154-strong Chinese workforce mainly comprises villagers officially deemed as farmers but who are now competent drillers and site managers. These highly valued employees are making a positive difference in their own lives, in their communities and in the drilling and mining industry. They now have an alternative to working in the fields and no longer have to solely rely on the harvest for their yearly income while their career paths can take them from farm labourers to project leaders.