Kal Tire’s Mining Tire Group has acquired the tyre services business of Klinge & Co in Australia. Kal Tire has been operating in Western Australia for about six years and it has long been a goal of the organisation to expand to eastern Australia where many major mines operate. 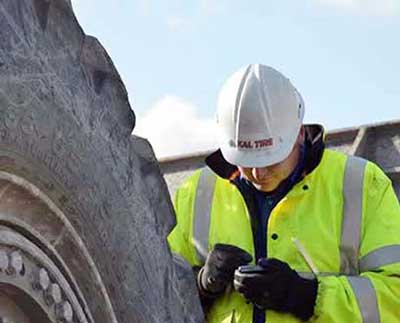 “Even though our reputation is strong and recognised in many countries, it has been a challenge convincing customers of our credibility inside Australia as our experience there has been limited,” says Kal Tire’s Mining Tire Group senior vice president Dan Allan. “With Klinge, Kal Tire aligns with a well-respected, trusted company known to the Australian mining industry and secures our presence as a national tyre service provider.”

Klinge & Co, co-owned by Tom and Dianne Klinge, is very similar to Kal Tire, which is also a family-owned organisation started by Tom Foord in 1953 in western Canada. Their cultural alignment is strong, both earning the respect of customers, and both regarding team members as part of the family.

“Kal Tire and the Klinge tire services business is a strong comfortable fit for Dianne and I,” says Klinge & Co co-owner Tim Klinge. “We share many of the same values and objectives, in particular when it comes to looking after customers and team members. And after much heart-felt thinking, we feel it is time to focus on the Klinge software business going forward.”

Klinge & Co will be a software company going forward focused on tyre management systems, training, and tools. They have a proven tyre management tool called ‘TotalTyreControl’, which has become an industry standard for tyre management software. Klinge will continue to develop its software business in Australia and provide software training in other parts of the world.

Kal Tire began its move east when it recently established itself in the area of Muswellbrook, NSW, with the opening of a mining tyre repair facility. Kal Tire will now offer this valuable repair service, including its Ultra Repair™ technology and a number of other value-added offerings, to Klinge’s customers.

“We are excited to welcome Klinge’s 200 skilled personnel to the Kal Tire family,” says Kal Tire president Robert Foord. “They bring invaluable experience with Australian miners. We’ve known Tom and Dianne Klinge for many years and we share the same commitment when it comes to how we think about our people and about our customers.”

When it comes to training and safety, the two organisations are strongly aligned. Kal Tire’s focus on Journey to Zero is a commitment to every team member going home safely every day.
Kal Tire also believes that every team member is the key to their success and extensive training and learning opportunities are provided. Its online Learning Management System contains both the international training standards set by the Tire Industry Association (TIA) as well as the company’s collective experience from 45 years of operations around the world.

It is very fitting that TIA recognized Tom Klinge in 2015 for his contributions and the impact he has had on the industry. The important training material he developed and provided to the TIA, remains a part of Kal Tire’s training portfolio.