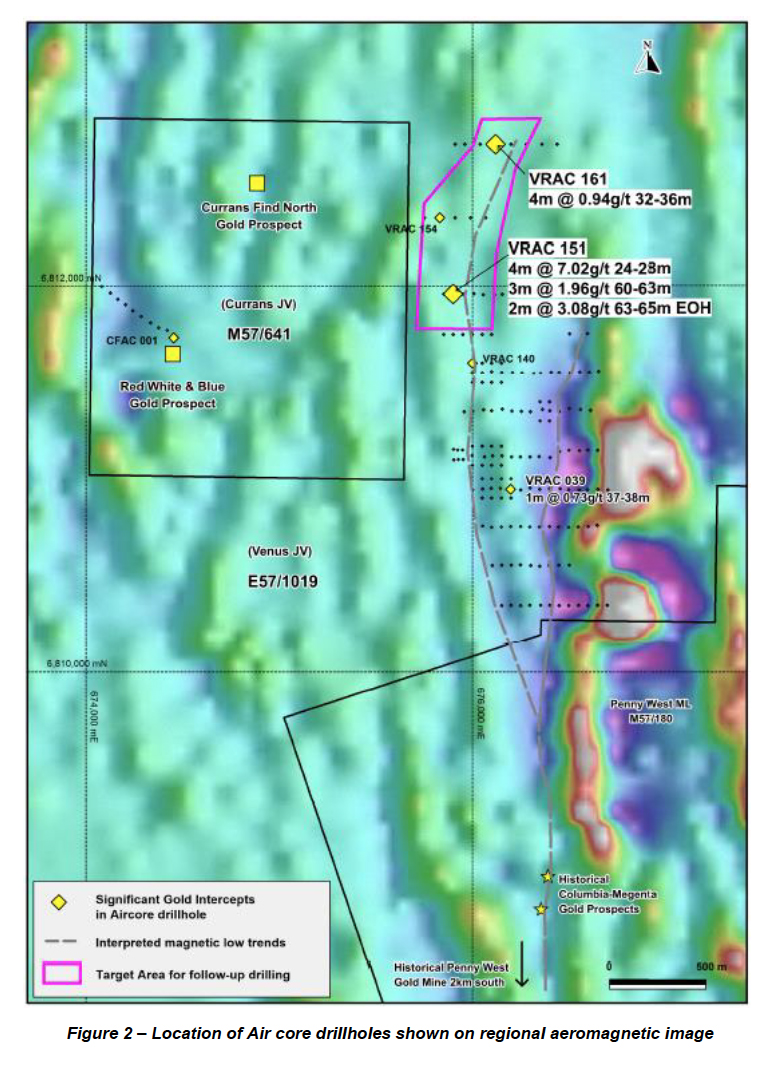 Significant results from this second round of AC drilling include:

The VMC Joint Venture is part of the wider Youanmi Gold Project.

Managing Director, Alex Passmore, commented that these air core results “build on the growing recognition of the gold endowment of the Youanmi belt and importantly feed into our regional understanding of controls on mineralisation.

The VMC joint venture is a Joint Venture between Rox and Venus Metals Corporation, where Rox is earning a 50 per cent interest in the gold rights of the tenements comprising the VMC Joint Venture, with VMC being the manager of the joint venture.

The VMC joint venture previously reported historical aeromagnetic data showing a magnetic low within which the Penny West gold deposit and the Columbia-Magenta prospects are. This magnetic feature extends north into the VMC Joint Venture tenement (E57/1019) where it appears to diverge into two subparallel trends both of which present highly prospective settings for gold mineralisation of the Penny West type.

The initial AC drilling was designed to explore for shallow geochemical anomalies (gold, lead, zinc and copper) that may indicate the presence of Currans North and Penny West-style high-grade gold mineralization at depth.

The current AC drilling program explored the strike extensions of the recently defined gold - base metals anomalies and has encountered significant new gold mineralization in two holes (VRAC151 and VRAC161). The strong gold mineralisation in VRAC151 occurs in two separate intervals with the upper one hosted in the clay zone (potentially, after a high-MgO rock), and the lower zone being associated with sheared mafic rock and vein quartz; the AC hole was drilled to blade refusal (rock getting too hard for the AC method) and stopped in gold mineralization.

The previous AC results outlined distinct lead, zinc and copper anomalies that are spatially associated with anomalous gold of up to 0.73 g/t. Drill hole VRAC151 has now intersected high-grade gold mineralization along strike from these initial anomalies and this is considered a highly significant new development in the exploration of the Youanmi Shear Zone. It represents the best gold intersection encountered to date along the Youanmi Shear Zone south of the Youanmi Gold Mining area and north of the Penny West and Columbia-Magenta prospects.

Follow-up RC and AC drilling to explore the new zone of gold mineralisation at depth and along strike has been planned and is scheduled to commence shortly.