Record copper sales and soaring gold and iron ore prices in the second half of 2020 have helped the Australian state reach its second-highest year of mining value, the latest South Australian government figures show. 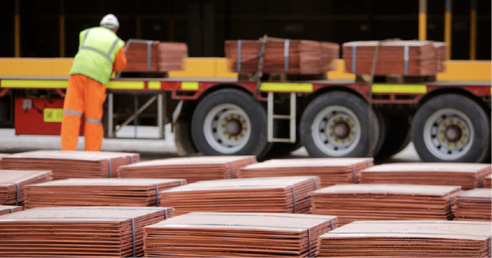 Figures published by the South Australia Department for Energy and Mining show the state’s mineral resource production for the 2020 calendar year reached A$7,059,477,619, up from $6.9 billion in 2019.

It is only the second time the sector has topped $7 billion in a year and is the second-highest year on record behind the $7.312 billion produced in 2014.

The slide in oil and gas production value coincided with plummeting oil and gas prices in 2020 as global travel ground to a halt during the pandemic.

However, it is also part of a longer-term trend that shows the value of the sector has declined every six months since the first half of 2019 when it contributed $847.6 million through to the $613.5 million it added in the second half of 2020.

Copper continued to be the state’s largest contributor in 2020 with $2.429 billion worth of production. This included $1.35 billion in the second half of the year, which is the highest six-month copper total in the state’s history and bodes well for another strong year in 2021.

Copper prices jumped by 24% in the second half of 2020 despite the increase in the value of the Australian dollar compared to the U.S. dollar.

This period has coincided with a 25% increase in copper production at BHP’s Olympic Dam for the nine months to March 2021.

South Australia’s largest copper mine produced 100,000 tonnes of copper in the second half of 2020 and a further 55,000 tonnes in the March quarter this year, the highest quarterly production at Olympic Dam in the past five years.

This was mainly due to the ramping up of production at Carrapateena, which began commercial operation in late 2019.

According to figures from the South Australia Chamber of Mining and Energy (SACOME), the state government received $311 million in mining royalties for the 2019/20 financial year, up from $299 million the previous financial year and $207 million in 2015/16.

SACOME CEO Rebecca Knol said although the 2020-21 State Budget predicted royalties to be $301 million this financial year, it was not yet known how the latest production figures would impact this figure.

“During 2020, the resources sector demonstrated both its resilience as a sector and its importance to the state’s economy,” she said.

“Copper, gold and iron ore were the driving forces behind the growth in 2020 with BHPs Olympic Dam, OZ Minerals Carapateena and Prominent Hill operations and SIMEC’s Middleback Ranges operation collectively contributed to this significant lift in productivity.

“These results should be sending a very clear message … that the resources sector is in a growth phase and providing well-paid employment in both metropolitan and regional areas.”

Specific state details will not be released until next week but they are expected to show South Australia’s growth was driven by copper, gold and cereals such as wheat and barley.

Across Australia, exports in April increased slightly from March to $35.95 billion in April but was $4.92 billion (16 per cent) on April 2020 driven by a $5.21 billion metalliferous ores on the back of booming iron ore, copper and gold prices and a $556 increase in cereal exports following an improved winter crop last year.

Exploring for the Future

In 2020 the Australian Government invested an additional $125 million in its Exploring for the Future program, bringing the total investment to $225 million. The new projects, led by Geoscience Australia, include three deep-dive projects in two potentially resource-rich corridors identified in 2020. Both corridors run through parts of South Australia.

Across Australia, exports in April increased slightly from March to $35.95 billion in April but was $4.92 billion (16 per cent) on April 2020 driven by a $5.21 billion metalliferous ores on the back of booming iron ore, copper and gold prices and a $556 increase in cereal exports following an improved winter crop last year.