OceanaGold Corp. reported an updated mineral resource estimate for the Martha Underground Project at the company’s Waihi Gold Mine located in New Zealand. 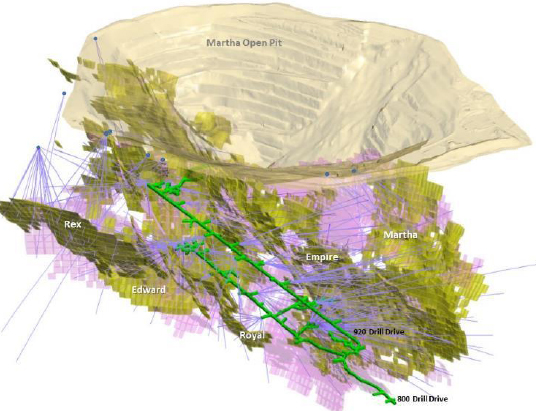 Mick Wilkes, president and CEO, said, “The Martha Underground resource continues to grow following further investments in exploration drilling in 2019. Infill and extensional drilling has resulted in an additional 440,000 ounces of gold accompanied by an increase in average grade of both Indicated and Inferred resource categories. The increase in resources from last year underpins the ten-year mine life that we have targeted for the Martha Underground.”

“Development of the Martha Underground continues to progress well with first production expected in the second quarter of 2021. The Martha Underground along with the WKP prospect form the basis for the Waihi District Study, which will be published as a preliminary economic assessment and expected to be completed in the second quarter of 2020,” Wilkes continued.

“We continue to be very excited for the future of Waihi. New Zealand is a top-tier mining jurisdiction, one that we have successfully operated in for the past 30 years and through our proven track record of operating to the highest environmental and social standards and reputation as a solid corporate steward, we are, together with our valued stakeholders from New Zealand, looking forward to many more years of employment, economic benefits and investments,” Wilkes concluded.

For 2020, the company expects to drill 25,000 metres in the Martha Underground with a primary focus on resource definition. In addition to the significant resource at Martha Underground, the company has a revised exploration target of 6 to 8 million tonnes of ore grading 4 to 6 g/t, reflecting the definition of new resources from this target over the course of the year. The company will continue to target new resources and their conversion throughout the coming years.

It is important to note that the exploration target is exclusive of the reported resource and relates to the portion of the deposit that has not yet been adequately drill tested. This exploration target is based on the assessment of surface and underground drill data collected by the company in addition to the significant amount of historical and archived geological and mine data from over a century of mining activity at Waihi.

The company continues to advance the Waihi District Study, a preliminary economic assessment that encompasses multiple ore targets with Martha Underground and WKP representing the most significant of these opportunities. Exploration drilling continues at both targets to support the study which is expected to provide an outlook of Waihi’s growth over the next several years. The study will include production rates, mining methods, operating costs and capital investments and is expected to be completed in the second quarter of 2020.

The Waihi District Study will include the resource of Martha Underground, WKP and other targets at a point in time however, exploration drilling will continue throughout this year and into future years to further grow the resource base of each.