Lithium Australia’s LieNA pilot plant has been given the green light. Pilot concentrate is being prepared from spodumene-bearing drill chips. 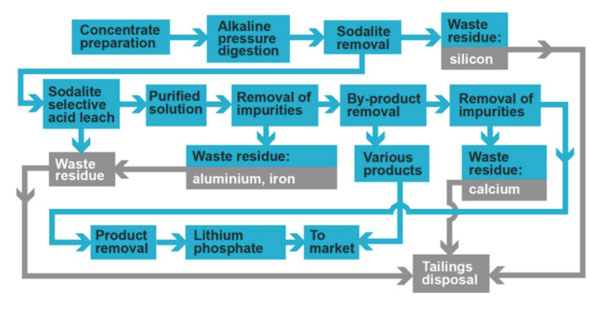 Construction of critical pilot-plant components has begun, with order for autoclave placed. Initial pilot-plant test run is scheduled for September 2021.

“Lithium Australia’s LieNA technology is the pinnacle for hydrometallurgical processing of spodumene, the principal hard-rock source of lithium,” said Australia Managing Director Adrian Griffin. “LieNA is capable of recovering lithium from fine and/or contaminated spodumene that fails to meet the feed specifications of current converters. It also provides the highest levels of impurity rejection. It is these characteristics that set it apart. LieNA, then, is designed to improve overall recovery and achieve better utilisation of existing resources: it’s about cost reduction, sustainability and maximising the benefit of our critical (and finite) resources.”

Conventional processes to recover lithium from spodumene (the principal ore of lithium) involve roasting as a first step. As implemented by currently operating converters, such processes are critically sensitive to particle size (fine particles cannot be processed) and also sensitive to impurities. It is the physical properties of spodumene (its two perfect cleavages, among others) that result in the generation of large volumes of fine material during the recovery of lithium to concentrate.

Any fine material that falls below the size specification of commercial converters cannot be used as feed and is thus rejected, resulting in less-than-optimal recoveries.

Currently, when spodumene ore is converted to commercial concentrates, somewhere between 25% and 50% of the lithium within the ore fed to the concentrator is lost. This leads to mining costs that are unnecessarily high and hence the higher-than-optimal cost of the lithium chemicals produced.

The LieNA hydrometallurgical process developed by Lithium is in stark contrast to those used by conventional converters, given that LieNA requires no roasting, is capable of handling very fine spodumene particles and exhibits superior impurity rejection during the lithium recovery process.

Being able to process fine/contaminated spodumene efficiently potentially removes one area of low recovery inherent in the lithium industry. LieNA is designed to remedy such loss and thus reduce the mining costs associated with lithium chemical production. In so doing, it could extend the life of existing and future resources – a goal the mining industry should be striving for.