THE stage 1 feasibility study for Besra Gold’s Bau Gold Project in East Malaysia indicates that Bau is estimated to become the 13th largest gold producing property in Asia by 2015. The study specifically covers the proposed open pit development at Jugan Hill towards the north-eastern end of the Bau Central gold trend. 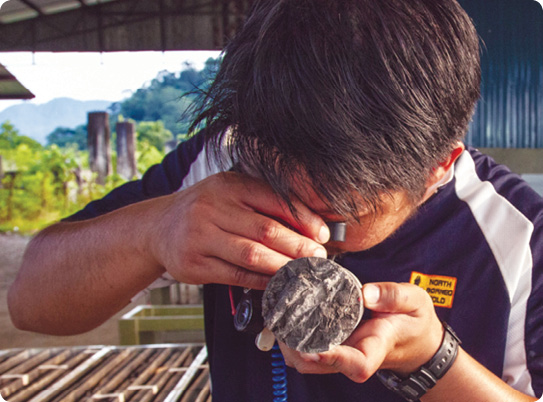 Examining core from Besra Gold’s Bau project in Sarawak, East Malaysia, which has potential to be a company maker.

After considering numerous different process routes, the study identified an optimum process (crush, grind and float) to produce a gold-rich concentrate that initially will be shipped for smelting and refining. As a result, significant savings will be made on capital costs and financing of the development should be attainable on more attractive terms. Besra is in discussions with Asian companies for a smelter offtake agreement, several of which have tested and confirmed their ability to process the concentrate. An indicative offer has already been received from one of the four smelters with more expected.

Besra’s CEO John Seton says, “The release of the stage 1 feasibility study is a significant step forward in Besra’s corporate development. Having already brought two gold mines into production in Vietnam, one of the toughest mining jurisdictions in the world, we now turn our attention to East Malaysia where we have established an economic justification and the technical feasibility of bringing the multi-deposit Bau property into first stage production.

“The initial 4-year mine life will be extended as nearby deposits are developed utilizing existing plant and infrastructure, and further improving project economics. A stage 2 pre-feasibility study has already commenced incorporating south-westerly extensions of Jugan Hill deposit and adjacent deposits. Stage 2 is expected to extend mine life to 12 years, increase total production to more than 1 million ounces and should at least replicate or exceed the financial returns of stage 1.

“Bau exploration remains at relatively early stage, with multiple deposits at various stages of exploration development and many prospective zones as yet entirely unexplored. Geological potential for substantially higher-grade mineralization has also been identified at depth. The exploration success rate suggests continued exploration has potential to progressively expand resources and reserves over decades to come.

“The Bau project has presented no fatal flaws. East Malaysia provides an encouraging environment for mining and foreign investment with a 0% gold royalty and 24% corporate income tax rate. Additionally, Bau is 40km from a deep water port in the Sarawak state capital of Kuching, and within 30km of Kuching International Airport. High quality infrastructure and services already exist and there is a supportive and skilled English speaking workforce with good education levels and significant mining or quarrying experience.”

Examining core from Besra Gold’s Bau project in Sarawak, East Malaysia, which has potential to be a company maker.