Centurion Minerals’ Myanmar partner has confirmed that the Slate Belt and Bandi mineral exploration concession applications have been accepted by the Myanmar Ministry of Mines. The company has initiated a property-wide exploration reconnaissance program while it seeks approval from the regional government. 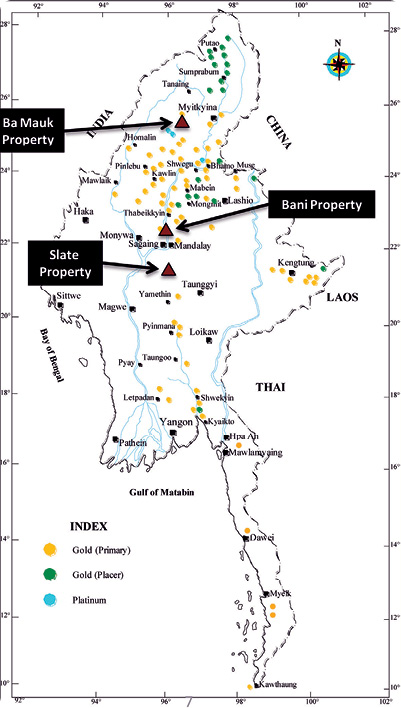 The 943sqkm Bandi concession is north of Mandalay city. The area is flanked by two operating gold mines, one of which is the Phayaung Taung mine to the south. The Bandi concession geology consists of granitic intrusions, marls, and other sedimentary rock types, all of which are cut by north-trending structures. Adjacent to the Bandi concession, gold skarn deposits are reportedly controlled by these structures. “Our technical team will implement a reconnaissance exploration program to generate priority prospects and finalize mineral concession approvals. The team includes several geologists who have previously explored the prospective areas of central Myanmar,” says Centurion’s CEO David Tafel.

Myanmar’s exploration and mining permits are issued by the central government and allow a mineral concession to be explored for up to five years followed by 25 years of production. Subject to receipt of all regulatory approvals, Centurion will hold an 80% interest in the concessions with 20% held by its Myanmar partner, Crown Minerals Co.

Centurion announces that Stephen Wilkinson has joined its Board of Directors. In the mid to late 1990s, he was the Vancouver- based mining analyst for RBC Dominion Securities responsible for small capitalization gold and base metal companies.

“Centurion is very excited to have Stephen join our Board of Directors. With an extensive background in mining, exploration and mineral project evaluation as well as an in-depth knowledge of the capital markets, Stephen adds immeasurable experience to our team. His positive recognition of our Myanmar gold project development enhances the confidence in our corporate strategy,” says chairman Alfred Lenarciak.