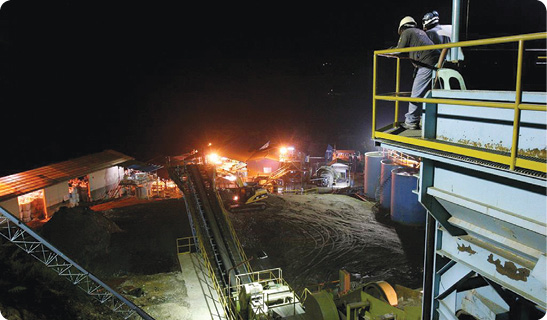 Milling operations at TVI Pacific’s Canatuan Copper-Zinc Project have been wound up.

Reserves mined significantly exceeded initial reserves as a result of additional material found and mined. This material was used in ore blending to optimize mill recoveries and was located both inside and outside the pit shell and not included in the original ore reserves.

The copper and zinc operations at Canatuan have provided a 5.9 year mine life as compared to an initially anticipated 5 to 6 year mine life but actual mill throughput has been much higher than planned. Actual daily throughput in recent months was increased to approximately 3500 tonnes.

The processing plant will be cleaned but equipment will not be dismantled while the company continues to assess mine life extension and expansion opportunities, including possible processing of mineralized waste dump material, possible new discoveries from exploration drill targets outside the pit area, possible production of pyrite concentrates, re-processing of tails and exploitation of possible economic deposits from outside the current MPSA. TVIRD is continuing to seek regulatory approval for expansion of the current MPSA to include these deposits.

Meanwhile, TVIRD is advancing its Balabag Gold-Silver Project with an independent NI 43-101 technical report having been completed. Based on drilling completed to the end of June 2011, the independent qualified person estimates an indicated mineral resource of 1.78 million tonnes averaging 2.34 grams/tonne of gold and 72.3 grams/tonne of silver containing 134,262 ounces of gold and 4,148,196 ounces of silver.

TVI also has an option to earn a 60% interest in the Agata Mining Joint Venture covering the Agata nickel deposits.