CENTRAL Asia Metals is increasing capacity of the solvent extraction-electrowinning (SX-EW) copper recovery plant at its Kounrad project in Kazakhstan through a number of planned capital programs. The initial upgrade to the plant’s infrastructure will consist of the installation of two additional coal fired boilers at a capital cost of US$2.2 million, bringing boiler capacity to 14MW. 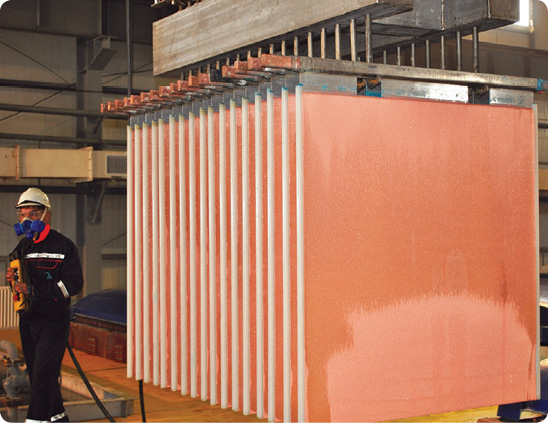 This work will facilitate an increased throughput in copper bearing solutions during winter operations and will enable the company to increase its 2014 production target to 11,000 tonnes of copper. Additional capital programs aimed at further increasing the plant capacity will be announced following completion of the transfer to Central Asia Metals of the remaining 40% of the subsoil user licence associated with Kounrad.

The SX-EW facility recovers copper from so-called waste dumps that originate from the Kounrad open-pit copper mine, and is near the city of Balkhash in central Kazakhstan. Sitting on the surface, these dumps accumulated from open-pit mining operations, carried out here between 1936 and 2005. Over the decades during which these dumps were piled up, oxides and low-grade sulphides of copper formed a large part of the tonnage deposited on surface. Recovery of this copper is achieved by in-situ leaching followed by SX-EW process.

During 2013, the first full calendar year of operations at the Kounrad plant following the completion of the construction phase in late April 2012, the plant produced 10,509 tonnes of copper cathode, exceeding the 2013 target by 5%.

The company acquired 60% of the mining rights in 2007 from the state body SEC SaryArka, and since that time have undertaken detailed test-work and technical studies, culminating in the construction of the copper production plant within 21 months for a capital cost of $39 million, $8 million below budget.

The longstop completion date for the transaction has now been agreed by the parties involved as June 30, 2014. The extension from March 31 reflects the process and time required to obtain all the necessary regulatory waivers.

Chief executive officer Nick Clarke says, “We are continuing to work closely with the relevant authorities in Kazakhstan to obtain all the necessary waivers to finalize the outstanding transfer for Kounrad. Significant progress has been made and as a company we are taking all the required steps to move the process along as quickly as possible.”