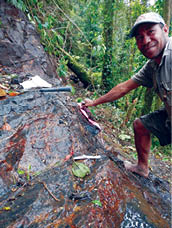 The trenches and outcrops demonstrate 180 metres strike length of generally very high grade gold with possible extensions to 470 metres and further possible extensions to more than 1200 metres.
The Lower Zone assay results included peaks of 0.4 metres grading 293.5 grams/tonne gold and 0.3 metres @ 197.0 grams/tonne. These results were about 30 metres apart on the same structure. There were 11 samples with greater than 25 grams/tonne and 13 additional assays greater than 1.0 grams/tonne.

Frontier also received very high grade gold results from the Upper Zone at Swit Kia with 13 samples at greater than 100 grams/tonne. The Upper Zone is about 70 metres north of the Lower Zone. Frontier says the Lower Zone was not sampled as systematically as the Upper Zone due to the original exploration program planning and subsequent time constraints in the field.

The maximum strike length of both zones will be better defined with additional trenching. Drill testing is strongly warranted and will be undertaken when possible. Frontier has established an exploration target for Swit Kia or 220,000 tonnes minimum to 20 million tonnes maximum.

“The strike length of the Lower Zone will be properly defined with additional trenching in several maximum strike extension areas, plus infill trenching on known area to better demonstrate the continuity and grade of the high-grade gold mineralization. This work will further demonstrate the excellent overall prospectivity and ultimate resource potential of the Lower Zone.

“Drill testing is strongly warranted in both zones. Frontier will attempt to determine the dimensions of the high grade gold mineralization as soon as possible and will accomplish this with one of the company’s diamond core drilling rigs that will be shipped from Kimbe to Lae and on to Bulago. The new airstrip being built by the landowners is having necessary drainage ditches dug at the moment.”