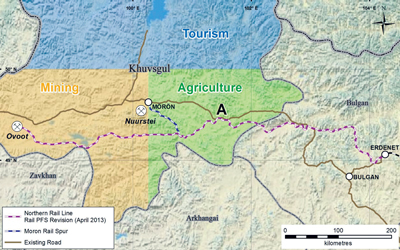 THE Ekhgoviin Chuluu Joint Venture (ECJV) between Aspire Mining and the Noble Group has intersected coal in all six exploration holes drilled at the Nuurstei Coking Coal Project in northern Mongolia. Exploration drilling began in September and was expected to be completed by the middle of October.

The program is designed to test resource continuity of coal and to target near-surface coal resources which could support a small road-based trucking operation. Some coal seam intersections from the latest program had claystone partings. The thickest intersections of 10.25 metres from 24.95 metres and 9.79 metres from 184.9 metres occurred in the same hole.

The ECJV believes the intersection of near-surface coal could present the opportunity of an open pit mineable resource, subject to further work being completed, continuity of coal seams confirmed and sufficient tonnage being identified.

Raw coal quality testing will be required to confirm ash and coking properties. Down hole geophysics from both the re-logging of 2011 holes and the holes completed in the 2014 program indicate densities in parts of the coal seam intervals, averaging between 1.3 and 1.4, which suggest moderate to low raw ash levels are expected in those coals, indicative of a possible coking coal product.

Nuurstei is 10km from the provincial capital Moron and 160km east of Aspire’s Ovoot Coking Coal Project. A sealed road from the nearest railhead at Erdenet to Moron will be completed in 2015. Nuurstei could also become a user of the northern rail line, a rail development project earmarked for northern Mongolia which will link through to export markets.

Aspire recently announced that it has entered into an advisory mandate with Argonaut, a corporate advisory firm and investment house which specializes in the natural resources sector from offices in Perth, Western Australia and Hong Kong. The role involves provision of general corporate advice, along with advice with respect to debt and equity funding options for Aspire’s rail infrastructure subsidiary Northern Railways LLC, and to assist in the negotiations with the Mongolian Government to establish licences to build and finance the Erdenet to Ovoot Railway.

There are numerous funding options available to Aspire and Northern Railways, including the sell down of interests in rail and the Ovoot Coking Coal Project, export credit agency and development bank tied debt funding, coal pre-sales and other tools.

Aspire’s managing director David Paull says, “Argonaut has been a long-term supporter of the company. Both Argonaut and Aspire believe that the recent development in rail infrastructure in Mongolia and the multilateral agreements between China, Russia and Mongolia will provide significant opportunities to raise the development capital for the Erdenet to Ovoot Railway.”