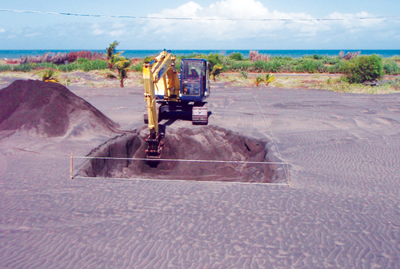 A FINANCIAL analysis prepared for Indo Mines’ subsidiary PT Jogja Magasa Iron regarding the development of a pig iron project at Kulon Progo has found that on the basis of the current commodity price and cost inputs, the project is not economically viable. However, the analysis also indicates that the valuation is particularly sensitive to capital costs and financing structure.

The analysis was carried out as part of PT Jogja Magasa Iron’s assessment of the viability of developing the project into a fully integrated mining and iron plant operation, to comply with the Indonesian Government value adding regulations.

A pre-feasibility study in relation to the technology option selected by the company has been completed and the operating and capital cost inputs used to prepare the financial analysis for the project and Indo Mines’ equity interest in that project.

Based on various process alternatives evaluated and their subsequent economic evaluations, the final process route selected was based on iron sand mining and concentration followed by SLRN Xtra direct reduction of iron and final SAF production of pig iron. Plant capacity is intended to be based on a staged development approach using multiple process lines. Hatch and Associates was appointed to project manage this process in conjunction with the reduction technology provider Outotec.

As a result of the subsequent financial analysis Indo Mines is evaluating various options to add value to the investment, including the ability to reduce capital costs and to enhance the financing structure, before it commits to a bankable feasibility study. It is also seeking to reduce operating expenses whilst it explores the various possibilities.

In line with this initiative, the company is streamlining the Board and consequently Chris Catlow and Stacey Apostolou have stepped down. Stacey Apostolou has also advised of her intention to resign as company secretary with effect from October 31.

Indo Mines, through the joint venture company, owns a 70% interest in the Jogjakarta Iron Project which is about 30km from the major city of Jogjakarta on the island of Java. Access to the site is via bitumen roads while there are also rail lines and high voltage power lines servicing the area.

The project centres on a 22km long by 1.8km wide stretch of beach between the Kulon Progo and Serang rivers. A probable ore reserve of 163.5 million tonnes at an average grade of 13.7% iron for the surface sands has been defined by CSA Global. Mining is scheduled to annually produce 2.0 million tonnes of concentrate at 55% iron.