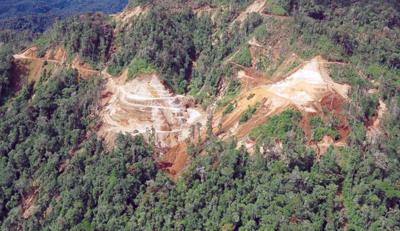 CRATER Gold Mining has been issued the Environment Permit for its Nevera High Grade Zone (HGZ) Gold Project at Crater Mountain. The permit was issued to the company’s wholly-owned PNG subsidiary Anomaly Limited by the PNG Director of Environment and Crater Gold is shaping up as Papua New Guinea’s next new gold producer.

The permit marks a significant milestone towards the development of the HGZ project following its assessment by the PNG Department of Environment and Conservation. Crater Gold proposes to commence small-scale underground mining with targeted production of approximately 10,000 ounces of gold during the first year of operation.

The Mining Lease Application was registered in May 2014 following a work program incorporating underground development and diamond drilling activities at the HGZ project. Following the MRA Technical Assessment Division completing its assessment of the Proposal for Development and with the Environment Permit now issued, the Mining Lease was to be tabled for discussion at the MAC meeting in late October.

HGZ mineralization is confined to numerous narrow highly oxidized veins trending approximately north-south with several cross cutting east-west structures. Development and drilling has shown that the junction of these structures is favourable for the occurrence of bonanza grades of coarse free gold up to 847 grams/tonne gold.

While the current focus remains on the HGZ for early production, there remains excellent potential to increase the current JORC-compliant resource of 24 million tonnes @ 1.0 grams/tonne gold for 790,000 ounces at the Mixing Zone project at Crater Mountain. This release was reported in November 2011.

Crater Gold’s CEO Greg Starr says, “We are excited to have taken another step forward towards becoming a gold producer. The issue of the Environment Permit now clears the way for the PNG Mining Advisory Council to recommend to the Mining Minister that the mining lease be granted to Anomaly Limited.

“Subject to the grant of the mining lease, we are well positioned to fast track mining activities, thereby generating cash flows and further fund advancement of our Crater Mountain assets.”

The company also recently released new results from recent drilling at HGZ. The infill holes were drilled upwards and confirmed the continuity of mineralization between the underground development and the surface artisanal workings. Results include 0.5 metres @ 56.3 grams/tonne and 1.0 metres @ 18.9 grams/tonne. Bulk sampling is now in progress at HGZ.