PENINSULAR Gold aims to resume gold production at the Raub project in July after receiving notification from authorities that the operation is in compliance with environmental conditions. Peninsular suspended operations on December 2, 2014, while it resolved the potential issue of the tailings storage facility’s location. 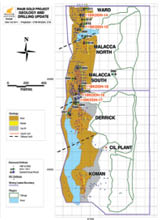 In acknowledging that RAGM was at all times in compliance with the conditions, the authorities confirm that there are no amended or additional requirements relating to the environmental approval and location of tailings dams.

Peninsular’s chairman and CEO Dato Sri Andrew Kam said discussions with the relevant environmental and other authorities had been positive. In a statement on June 1 he said that management had received confirmation that existing conditions of the environmental permit remained unchanged.

“Since cessation of operations we have focused on the management of RAGM’s bank loans and trade debts while also seeking to raise additional funds to cover overheads and to get the Raub mine operation restarted. To this end we have obtained the support of our main lenders and Bank Rakyat, Alkhair Bank and Peninsular’s 2013 convertible loan note holders, all of whom agreed to defer payments until June 2015, with Bank Rakyat recently agreeing to a further deferral to November 2015.

“Peninsular raised additional funds of £1.8 million via the issue of convertible, redeemable unsecured loan notes. We are continuing to seek additional funds or refinancing options whilst also seeking a further deferral of the 2013 loan notes, and Alkhair Bank’s repayment obligations until the plant can be restarted and sufficient operational cashflows generated. “Discussions to date have been positive with the bank and the loan note holders with respect to the further deferral. With regard to the potential additional funding, we are in discussions with several potential investors and hope to shortly secure a raising.

“Our objective remains to restart the Raub operation toward the end of June, early July and to be producing gold in July 2015, and to raise additional funds which may also include the refinancing of existing facilities.

“On the exploration front we intend to recommence the exploration work at Raub, once funds allow, targeting additional near surface and deeper targets. Within the SEREM exploration grounds we will continue to develop and secure our exploration and mining permits,” he said.