ECR MINERALS is considering the extent to which it may carry out further exploration at Danglay Gold Project in Luzon following publication of a technical resource report. ECR is operator of the project with the right to earn a 50% interest as part of an earn-in and joint venture agreement between ECR, Tiger International Resources and Cordillera Tiger Gold Resources. 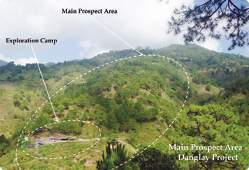 ECR’s CEO Stephen Clayson said, “The report includes all material scientific and technical information in respect of the Danglay project, and directors hope that it will help shareholders, potential investors and other interested parties come to a more detailed understanding of the project’s merits.

“The report makes detailed recommendations for further exploration at the project, with a budget of US$775,000. Directors are considering the extent to which these recommendations may be implemented by ECR.

The technical report, prepared by Exploration Alliance, followed the announcement of the first resource estimate for the site, previously known as the Itogon project. This resource, prepared independently by Neil Motton of the consultancy Snapper Resources, showed an inferred oxide resource of 1.2 million tonnes grading 1.6 grams/tonne (g/t) for 60,500 ounces in the inferred category.

This represents the surficial oxide mineralisation only and ECR believes there are further exploration targets containing sulphidation vein-hosted mineralisation that are similar to other deposits in the area. A new conceptual exploration target sees between 600,000 tonnes grading 5 g/t for 95,000 ounces and 700,000 tonnes at 7.5 g/t for 170,000 ounces.

During the process of completing the report, three areas of oxide mineralization - Danglay Ridge, Hillside and Bito - were identified.

Danglay is about 14km southeast of Baguio City. It lies within the prolifically gold-copper mineralized Baguio District and has a history of artisanal mining which continues on a very small scale. Local miners extract weathered and oxidized quartz veins from a series of near surface shallow adits and process the material on-site using very small scale mills, and rudimentary gravity and cyanide leach recovery techniques.

Stephen Clayson says, “The project lies within the Baguio District from which tens of millions of ounces of gold are estimated to have been mined to date. This has positive implications for Danglay, in that factors such as the availability of skilled staff at competitive rates and the social acceptance of mining contribute to a positive setting for development.”