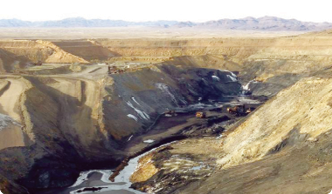 As the mine delivered staged volume increases to attain a monthly production target of 125,000 tonnes in the 2015 December quarter, it became evident that the existing supply chain was not able to support a rapid tonnage increase. TerraCom decided that in line with the Tsaagan Sar/Chinese New Year border closures, it would slow down mining and establish a new supply chain.

The new chain focuses primarily on a different washing provider in Ceke. The new XingChen CPP is a Jig/TBS/Flotation wash plant with annual capacity of 3 million tonnes. This plant is forecast to improve yield results due to the processing configuration and its focus on the finer size fraction of coal.

The company also executed a new long-haul contract from BNU to Ceke in late-February, a second long haul contract in mid-March and a new short haul contract from Ceke to the wash plant in late-March. The chain also involves a new sales offtake agreement, new China import agent, and plant optimisation and commissioning.

Mining ceased for the Tsagaan Sar holidays on February 4 and all employees and contractors, outside a minimal maintenance and export crew, were demobilized. The slowdown continued in March while the alternative supply chain was established. The focus in this period was to remove fixed costs and reduce the stockpile to target levels.

During the quarter BNU mine continued its impressive safety record of No Lost Time Injury (LTI). As at March 31 the project had recorded 1.6 million man hours without an LTI.

TerraCom has been granted four new exploration licences by the Minerals Resource Authority of Mongolia and completed an exploration strategy review identifying and ranking a number of prospective targets for the 2016 exploration program.

TerraCom has also made positive progress on the potential acquisition of cashflow positive assets in central Queensland and Indonesia to supplement cashflow and de-risk from a single mine company.