TVI Resource Development (Phils) (TVIRD) has received approval for the Declaration of Mining Project Feasibility (DMPF) at the Balabag Gold-Silver Project in Zamboanga del Sur province, the Philippines. It was the last major permit required to initiate the development, construction and operation of the mine. 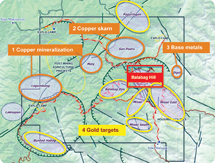 There are a number of targets at TVIRD’s Balabag Gold-Silver Project in western Mindanao.

This milestone will support TVIRD’s valuation as it seeks to list on the Philippines Stock Exchange (PSE) in the second half of 2016. Canadian resource company TVI Pacific has a 30.66% equity interest in TVIRD.

TVIRD chairman Clifford James, who is also chairman and CEO of TVI, said, “Balabag is the fourth mining project to be successfully permitted by TVIRD in the Philippines over the past 11 years and I am confident that TVIRD will secure the necessary funds to move the project forward prior its listing on the PSE later this year.

“At TVI, we are very pleased with this development as a permitted Balabag project will greatly support TVIRD’s efforts to list on the PSE and the listing could provide TVI with both a short and long-term source of funding for our resource acquisition and development activities.”

The Balabag DMPF was approved by the Department of Environment and Natural Resources (DENR) on April 29. It authorizes TVIRD to proceed with the development and operation of the project initially over a 180-hectare portion of the MPSA area covered by the ECC granted by the DENR in October 2013. This area covers all currently defined resources at the project as well as proposed mining and processing facility sites.

TVIRD holds 100% of the Mineral Production Sharing Agreement area covering 4779 hectares containing the Balabag project. The epithermal project is in the town of Bayog and is about 75km east-northeast of TVIRD’s Canatuan mine.

While exploration and development work have been put on hold at the Balabag project since mid-2013 pending the receipt of all permits, TVIRD has continued to work on the engineering design for a gold-silver processing plant to process ore on-site. TVIRD has also constructed and maintained 16km of access roads to the project in anticipation of the commencement of construction.

The project requires a capital investment of P1.04 billion and is expected to generate P6.54 billion in revenues.