DRILLING has encountered additional high-grade gold and silver mineralization in the recently discovered epithermal system of Prospect 190 (Gold) at Geopacific Resources’ Kou Sa project in Cambodia. Mineralisation has also been extended at Prospect 128. 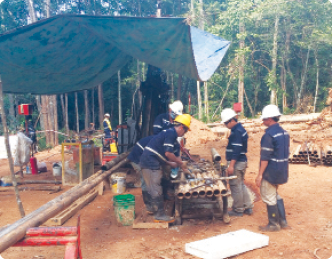 The results are up-dip from previous results, which included 7.35 metres @ 12.39 g/t gold equivalent, and indicate that the zone extends upwards to within 40 metres of the surface while also continuing to the west.

The Prospect 190 (Gold) discovery was made earlier this year and is the first time that epithermal gold-silver mineralization has been encountered at Kou Sa.

Similar to other Prospect 190 (Gold) near-surface holes, the high-grade mineralisation falls within a broad zone of altered rocks that form a large, low-grade gold and silver halo up to 50 metres wide. The width suggests that a significant source is responsible for this mineralisation.

In epithermal systems the proportion of gold relative to silver typically increases with depth. Consequently, the relatively high proportion of silver to gold indicates the intersections to be near the top of the system with an expectation for gold to increase with depth. This will be tested up-dip, down-dip and down plunge by future drilling.

Geopacific’s managing director Ron Heeks said, “Our new epithermal system is becoming more robust. The results also reinforce the area’s potential to host a significant, deeper source demonstrated by multiple mineralisation styles over a wide area. We are hopeful Prospect 190 will develop into a significant gold-silver zone and complement the high-grade gold and silver mineralisation found at prospects 150 and 160.”

Drilling at Prospect 190 is also encouraging for the Prospect 170 area in the southwest of the licence. The surface geochemistry is very similar in nature with several holes encountering high-grade silver mineralisation.

Meantime, drilling at Prospect 128 has continued to extend the zone of mineralisation to depth and the west. Recent results highlight both good grade and widths of the copper mineralisation in this area. There are three distinct repetitive mineralised zones which currently extend over a 400 metre area.